Robert Engelhart QC, sitting in the High Court as a Chancery division judge, has found that Fresh trading Limited (“Fresh”), the owner of the Innocent smoothies brand, was the owner of the copyright in “the Dude” logo – its main brand logo.

Fresh is the parent company of Innocent Limited through which the business Innocent smoothies is now conducted.  The Defendant, Deepend Fresh recovery limited is a company formed in order to claim IP rights in work commissioned by Fresh from a design agency formerly called Deep End Design Limited (“Deepend”).

In 1998, three friends set up a business making smoothies, which later became the Innocent smoothies business.  They reached an agreement with Deepend whereby Deepend would do all of their design work for shares in the company rather than for immediate payment for the design work.

The parties entered into an agreement which included under Clause 5.1 that “Fresh Trading Ltd receive full intellectual copyright of any work, creative ideas or otherwise, presented by the agency and then subsequently approved by Fresh. Work not approved by Fresh remains under the ownership of Deep End”.

Under Clause 3 of the agreement, it was stated that this was to be a relationship of partnership rather than “normal client / agency” and under Clause 4, it set out details of the remuneration which involved staged payments of equity in Fresh. Whilst the parties agreed that the deal had been agreed and that work was carried out under the agreement, neither party could produce a signed version of the agreement.

In late February or early March 1999 the “Dude” logo (see below) was created by Deepend. Fresh was very happy with the logo produced and it has been used ever since in Fresh’s marketing material and so was undoubtedly “approved” for the purposes of Clause 5.1 of the agreement. 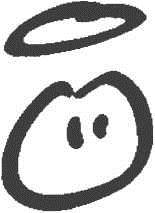 Whilst some discussions were had between the parties over the share entitlement, no shares were ever allotted to Deepend. Neither Fresh nor Deepend took any further steps to put the grant of the shareholding into effect. In 2001, Deepend went into liquidation. At this point there was a further discussion between the parties regarding the shares but this was not pursued. Shortly before the liquidation of Deepend, Mr Chappell, the second defendant, concluded a deed of assignment with the liquidators under which he acquired all of Deepend’s interest, if any, in the copyright in the works created by Deepend for Fresh.

In April 2009, Mr Chappell assigned the rights he had acquired from the liquidators to Deepend Fresh and Deepend Fresh then commenced invalidity proceedings before OHIM in respect of the Fresh CTM consisting of the Dude logo.

This was on the basis that the copyright in the logo was owned by Deepend Fresh. In December 2012, OHIM’s Cancellation Division issued a decision declaring the trade mark invalid.

Fresh launched an appeal against this decision and commenced proceedings in the High Court for declaratory relief that (i) Fresh was the legal owner of the copyright or (ii) that Fresh is the owner in equity or (iii) as a minimum that Fresh has an implied licence. The defendants counterclaimed that they were the owner of the Dude logo and certain other works.

The High Court granted Fresh declaratory relief and found that there had been an equitable assignment of copyright.

The Judge found that the agreement between the parties had never been signed since he felt that if the agreement had been signed it would be highly improbable that there would not have been a single copy retained by either party.

The Judge held that there was an equitable assignment of the copyright. He rejected the defendants’ submissions that Fresh refused to pay Deepend. He found that not only was there no refusal to pay but also that the actual allotment of shares to Deepend was not a pre-condition or specific performance to perfect the obligation in Clause 5.1 of the agreement.

This case is a useful reminder to companies retaining design agencies to design logos or other works of the importance of ensuring that the copyright in the resultant works is owned by the company and not the design agency (which is the default position under copyright law). It is also useful to note that an assignment of future copyright will not be effective if it is subject to further conditions; for example, in this case the assignment was subject to approval of the work by Fresh.